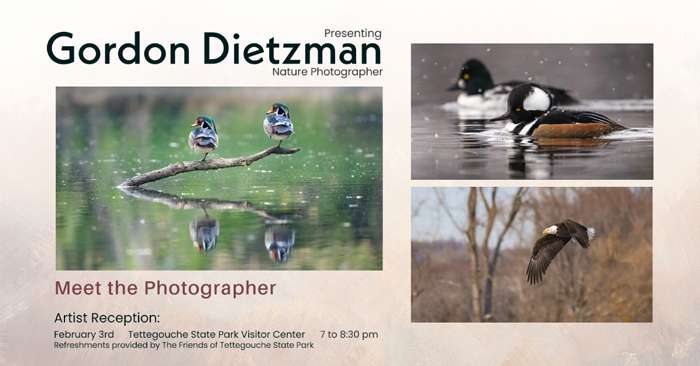 Location
Tettegouche State Park Visitor’s Center, Silver Bay MN
Come and meet nature photographer, Gordan Dietzman!
Gordon Dietzman grew up on a dairy farm in the Driftless Area of southwestern Wisconsin where he hiked, studied wildlife, and enhanced wildlife habitat. That experience with both wild and domestic animals led to a life centered around the conservation of wildlife. He has a degree in Interdisciplinary Studies with an emphasis in environmental interpretation from the University of Wisconsin–Green Bay. For over a decade he worked at the International Crane Foundation near Baraboo, WI where he helped direct the Foundation’s conservation education efforts, trained seasonal staff and volunteers, gave off-site presentations and led on-site tours. He also worked on conservation programs in Vietnam’s Tram Chim Refuge, now a national park, in the Mekong delta. He ended his career retiring from the National Park Service after nearly 12 years in which he led bird hikes, river canoe trips, fishing programs, maintained the park’s website, and interpreted the fascinating natural and human history of the Mississippi River in the field and in the park’s two visitor centers.
Gordon has photographed nature for 40 years and has traveled extensively throughout North America, Southeast Asia, and his own backyard. His photography spans a wide range of wildlife including tiny insects to North America’s largest mammals and he often provides presentations not only on nature photography but his personal experience on conservation issues.
Gordon’s work will be on display during the month of February.