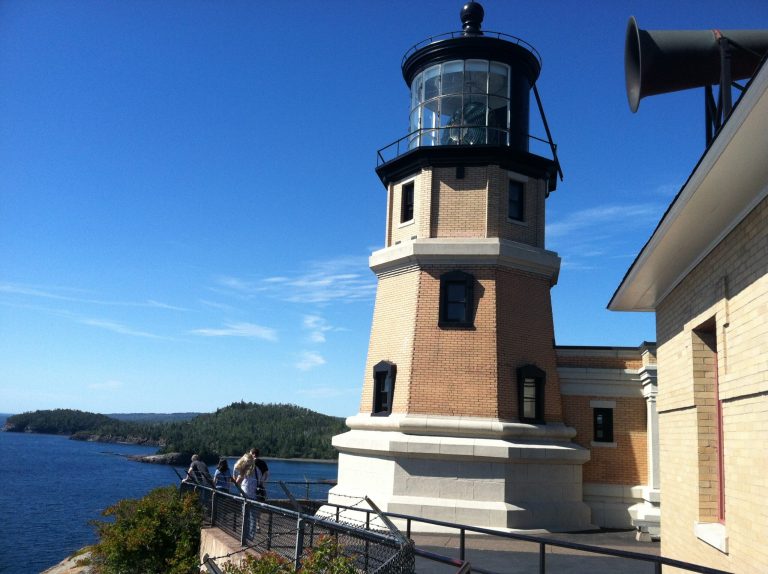 Split Rock Lighthouse stands as a North Shore icon perched on the cliffs of Lake Superior. The historical lighthouse became a National Historic Landmark in 2011 after restoring it to its 1920 appearance.

Visit the beautiful historical grounds within Split Rock Lighthouse State Park and learn about the fascinating history of the beacon that guided ships on Lake Superior for half a century. The Split Rock Light Station was built in 1910 and stands in the heart of the 25-acre historic site.

On November 28, 1905, the worst storm in Great Lakes history hit Lake Superior: The Mataafa storm. On this day, the Madeira was under tow of William Edenborn. The captain of the Edenborn cut the tow line, believing that the Madeira may survive the storm if it cast anchor and rode it out. However, Madeira soon crashed into Gold Rock, just north of the present location of Split Rock Lighthouse.

One Scandinavian member of the 10-man crew, Fred Benson, courageously grabbed a line and jumped off the ship’s deck landing on a rock at the base of the cliff. Braving the storm, Benson then climbed atop the 60-foot cliff and dropped his rock-weighted line onto Madeira’s deck, rescuing three trapped men. He then dropped a line onto the stern deck, saving five more men. Sadly, the first mate lost his life as he tried to climb to safety. Two days later, Edna G rescued the survivors and recovered the first mate’s body. Twenty vessels suffered damage from the Mataafa storm. After the shipwrecks, the Pittsburg Company campaigned for the government-funded construction of the famous lighthouse and erected it in 1910.