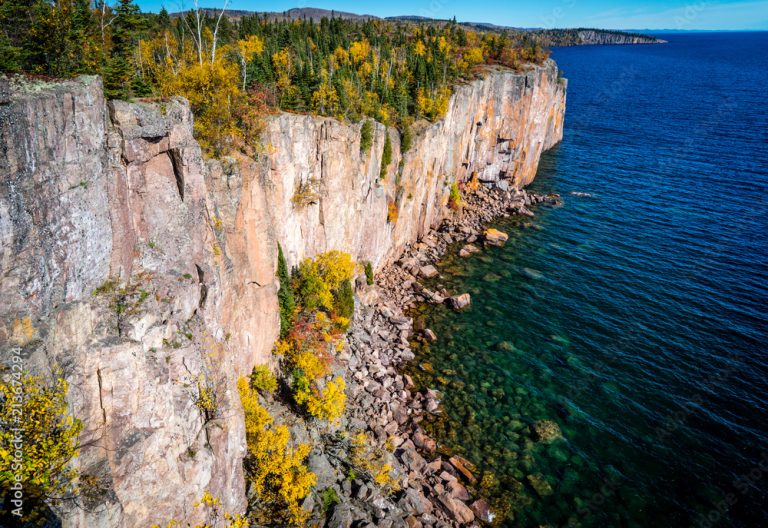 Palisade Head, an iconic rocky cliff formation, provides one of the most stunning overlooks along the North Shore. Visitors who make the short, steep drive off Highway 61 will stand in awe as they gaze upon the panoramic view of the rugged Lake Superior shoreline.

A designated section of Tettegouche State Park, it’s located outside the main park and ranks as a stand-alone attraction.

The Minnesota DNR maintains the attraction in its natural state, so visitors may independently explore the rugged, rocky terrain in its pure form. However, please exercise caution! Observe children as the cliffs are extremely dangerous.

What is the Height of the Palisade Head?

The high point of Palisade Head measures more than 300 feet above Lake Superior’s surface. Its surrounding cliffs stand hundreds of feet above the water level.

How was Palisade Head Formed?

The rockly cliffs were formed from rhyolitic lava flow forced out around 1.1 billion years ago during the Precambrian eon – the earliest time in earth’s history. Then, the continent spread apart, expanding from what today is eastern Lake Superior through Duluth to Kansas. The expansion stopped before an ocean could form, although Lake Superior is often called an inland ocean! The fascinating 200-foot thick lava flow formed the unyielding, hard, volcanic rock, which resisted erosion for a billion years! Shovel Point also was created through this process.

A notable spot for climbing, the North Shore rock formation features high, open-faced cliffs emerging from Lake Superior. Only experienced climbers with proper training should attempt this climb, and you must acquire a free permit from the park’s headquarters during business hours.